This demonstration illustrates the material property of thermal conductivity, and how this property affects conduction heat transfer in a solid.  Concepts include Fourier’s Law, conservation of energy and solid-liquid phase change.  This demonstration should take 8-10 minutes.

Fourier’s Law states that the heat transfer rate in a solid is proportional to the thermal conductivity, k, cross sectional area, A, and temperature gradient of the material.  At the surface, assuming the x-direction is into the solid,

For two similar solid blocks at the same room temperature, the block with the higher thermal conductivity will “feel” colder to the touch, because thermal energy is more readily taken from your hand (heat source) into the block.  Likewise, if a colder sink is placed into contact with the two blocks, the material with higher thermal conductivity will transfer thermal energy out of the block faster.

Unless a steady condition has been achieved, the two blocks will change temperature at different rates according to

where the rate of heat transfer, q, is proportional to the mass, m, specific heat of the material,

, and the rate of temperature change with time.

The block with the higher thermal conductivity will more rapidly lose thermal energy to the cold sink, producing a greater temperature change of the block with time.  This is valid if both blocks have comparable heat capacity rates (

Before Class: Have two ice cubes ready, at below freezing temperature.  Keep in an insulated container to prevent any melting before the demonstration.  Allow the two blocks to sit in the same space for some time so that they come to the same equilibrium temperature. 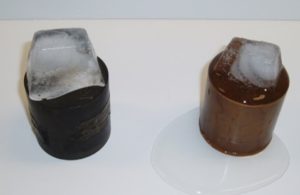 (c) After the copper has melted the ice cube, circulate both blocks once again.  The copper block will feel much colder as it has lost more thermal energy.  The copper block will feel cold for some time, which will show how latent heat can be large as compared to sensible heat.  With the time and initial mass of ice cube known, the average heat transfer rate from the copper block can be calculated according to equation (3).  The temperature of the block can be estimated then using equation (2) if the mass of the block is known.  This assumes other heat transfer from the block is negligible.

a) Before starting, ask for an explanation of why something feels cold or warm. Establish with the class that you do not feel temperature, but rather temperature differences and the heat transfer that results.

(b) The ice melting can have all of the excitement of a race, even with copper being the clear winner.  Take bets, and ham it up!

(c) A discussion can follow regarding the spatial variation of temperature in the blocks, due to the different thermal conductivities.  This may be a good lead-in into a lesson on lumped capacitance.

(d) Discuss thermal losses to account for all energy transfers to and from the block, and stored energy change of the block.  An expression for conservation of energy can be obtained for the block as

where the energy input is from the air via convection and table underneath the block via conduction, which are both warmer once the block begins to cool.  There is no energy generation.  The energy output from the block is to the ice and ice-melt, which are both colder, mostly as latent heating of the ice in equation (3) but also as sensible heating as given by equation (2).  The stored energy of the block is given by equation (2) for a block with uniform temperature.  This will be a negative term.