This is a demonstration of the basic principles underlying the behavior of rotating bodies. A cylinder “race” is used to show that the closer the mass of an object is concentrated to an axis of rotation, the faster it will spin because it has a lower moment of inertia, which is a measure of a body’s resistance to rotation. The video below provides a brief synopsis of the demonstration. These materials can be easily manufactured. Additionally they (or similar materials) can be obtained from businesses that specialize in building teaching aids, such as Arbor Scientific. 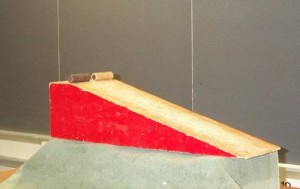 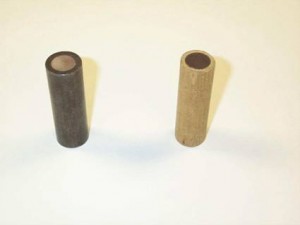 In Class: First establish the scenario by introducing and describing “the players” in your best race announcer’s voice. Then, without any analysis, ask the students to guess which “player” will win the competition. Ensure you record this on the board. Build up to the start of the race and stop just short of letting them go. Ask students to consider if weight might be a factor affecting the outcome, then provided the class with the weight of each player and see if their guesses change (record on the board). Again, build up to the start and stop short to discuss the concept of mass being a resistance to translation and moment of inertia as resistance to rotation. Have students help you calculate the moment of inertia for each of the players (figure 4) and take a final tally of the bets. Finally, let the race happen! Observations: The student should observe that the outcome is a factor of the moment of inertia and not the weight (given the overall dimensions and the weight of the players are approximately the same.

Hype up the event by dramatizing the race! Consider using racetrack videos and noises which can easily be found on the internet. Ask students to guess which will win once the scenario is set up and before the principles are discussed. Build suspense by working your way to the “gun shot” starting the race, then backing off the start to analyze another aspect. If you’re using Power Point, incrementally build your slides to build suspense!

Furthermore, cylinders of different materials and diameters might be considered (figure 5). 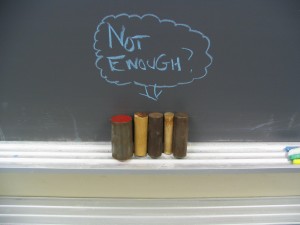 Al Estes, Charlie Packard, and Tom Messervey (2014), "A Day at the Races: Moment of Inertia," https://www.handsonmechanics.org/dynamics/106.