This is a simple demonstration of the basic principles and behavior underlying projectile motion.  A Nerf gun is used to show that projectile motion can be modeled by a particle having a vertical component of motion with constant acceleration, and a horizontal component with constant velocity (zero acceleration).   This demonstration should take 5-8 minutes.

A projectile follows a curved path that is approximately parabolic, provided that air resistance can be neglected.  This curvilinear motion is planar (approximating a portion of an inverted parabola in a vertical plane), and describable in terms of horizontal (x) and vertical (y) coordinates.   The motion of the projectile can be modeled by a particle having a vertical component with constant acceleration (g, downward) and a horizontal component with constant velocity (zero acceleration).  The following equations describe the particle’s motion in terms of these coordinates: 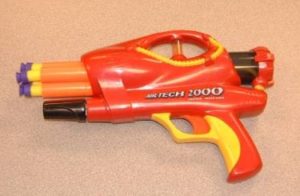 Notice that the two equations are independent—the horizontal and the vertical components of the particle’s motion can be considered separately. If air resistance were not negligible, however, such as for a paper wad, the equations would be coupled—and more complicated.

Before Class: Mount the protractor to the toy gun so that the flat edge is aligned with the barrel and the curved edge faces down.  Attach the “plumb bob” to the middle of the protractor’s flat edge, to permit angular measurements of the barrel’s inclination angle.  Make these attachments in such a way that the operation of the toy is not hampered. Experiment with the toy gun so that you have a feel for how far and how high the soft projectile will go within the classroom. 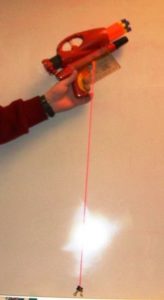 In Class: Introduce the equations above and use the toy gun to validate them.  Use students as time keeper, recorder, impact point marker, etc.

Determine horizontal and vertical launch velocities from measurements of angle of inclination, launch height, and time of flight using the equations above.

Demonstrate, space permitting, that different angles of fire can result in the same range.  (This may be difficult if your class has a low ceiling.)

Additional Application: Once the firing velocity is determined, the students can determine the firing angle and height required to hit some target of interest, say the mascot of the school’s arch rival on the sport field!