This is a demonstration that uses a fish tank to reinforce the definition of a fluid and some of the important physical characteristics associated with fluids.   This demonstration should take 3-5 minutes.

A fluid is defined as a substance that continuously deforms when subjected to a shear stress.  Additionally, the molecular spacing in liquids is essentially constant and therefore a given mass of liquid occupies a certain volume of space.  That volume will fill the container in which it is placed.  Finally, when analyzing the behavior of fluids, they are normally treated as a continuous substance, or a continuum.  This eliminates the requirement to treat each fluid molecule independently, and allows one to deal with the average properties instead.

Before Class: Fill the fish tank and have it on a rolling cart if possible.  This will enable it to be placed in a prominent position during the actual demonstration.  It must be close enough to the wall so the fan can be plugged in and reach the tank, unless you are using an extension chord as well.

In Class: After discussing the definition of a fluid, ask the class what types of shear forces exist in nature.  Most will answer “gravity,” but some may mention wind which can lead into the use of the fan.  Alternatively, pull out the fan and ask them what kind of force you could create with it – lead them into answering “shear stress.”  Ask the students what will happen when you turn on the fan and place it (horizontally) above the water.  Common sense should tell them that it will deform or ripple.  Turn the fan on and let them watch the surface deformations occur.

You can also reinforce the concept of liquid fluids occupying a fixed volume.  Discuss why the water takes on the shape of the fish tank.

When discussing the concept of a continuous fluid, point out that while the viscosity, density, specific weight, etc. of each water molecule may vary slightly based on its location in the tank, the differences are insignificant and the average properties are almost always used.

Observations: Students will see the water surface deform as a result of the shear stress imparted by the fan. 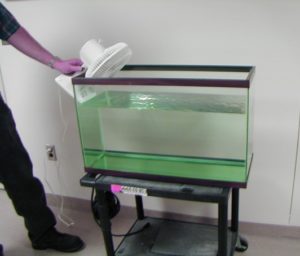 Additional Application: The deformation of the water surface can also lead into a discussion of viscosity as a measure of resistance to deformation (i.e. “What would happen if I replaced the water with honey and turned on the fan?”)