A thin rectangular sheet of rubber material is subject to an axial load.  Stress blocks are painted or drawn on the rubber material.  The stress blocks are oriented on a transverse plane (black square) and on a plane 45° from the transverse plane (red square). Students have previously learned that only normal stress exists on the transverse plane and the 45° plane experiences the maximum shear stress.  As the rubber material is stretched, the students can see that sides on the transverse stress block get longer in the longitudinal direction and shorter in the lateral direction while the angles at the corners do not change.  Students can use a ruler to compute the normal strain and Poisson’s ratio for the material.  Similarly, on the 45° stress block, the lengths of all four sides increase the same amount and the angles change.  The angles on the top and bottom corners get smaller and the angles on the left and right corners get larger.  This demonstrates that shear stresses and strains exist within an object subjected to an axial load.. This demonstration should take 35 minutes. 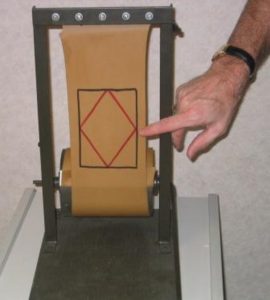 Normal strain in the longitudinal direction (

) is defined as the deformation per unit length.

is the original undeformed length,

is the final length after a load has been applied and

is the resulting deformation.

Conversely, the width of the stress block is getting smaller. The strain in the lateral direction (

are the initial and final widths of the stress block, respectively.

) is the ratio between the longitudinal and lateral strains:

) is the change in the angle on the stress block caused by the deformation:

as shown on the diagram below. 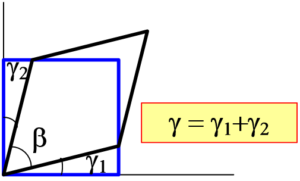 For an axially loaded member, the shear stress and the normal stress are different for different planes.

For any given angle (

) shown on the drawing above, the normal stress (

) can be expressed as

where P is the applied axial load and A is the transverse area of the cross-section.  Normal stress is a maximum on the transverse (90°) plane and is equal to

and the normal stress is

and the Shear Modulus can be computed as 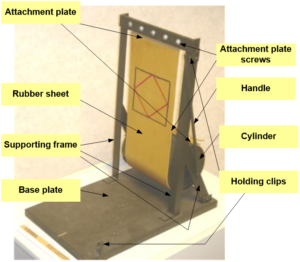 Before Class: Bring the axial strain device, a ruler and a protractor to the classroom. 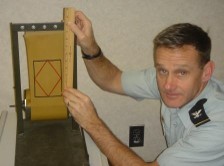 For a short demonstration, the students will be able to see the qualitative difference in the two stress blocks as they change from the undeformed to the deformed position.  Getting the students to describe what they see and attempting to relate this to stress-strain theory is an effective 2 minute learning demonstration.  For a more detailed demonstration, make some computations based on the measurements and assess whether they support the theory.  For the device shown in the photo, the measured results and sample calculations are shown below: 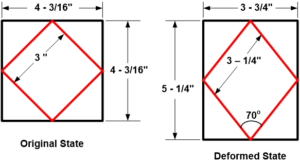 Additional Application: Rather than looking in a reference book for the Young’s Modulus value for rubber, you could use this device to compute the approximate value.  You have already computed the longitudinal strain value when the handle is in the extended position.  Attach the handle to a spring loaded scale (similar to those used to weigh a caught fish).  Determine how much force it takes to hold the handle in the extended position. Compute the force on the rubber membrane (

) using the force that it takes hold the handle in place (

The normal stress on a transverse plane is