The basic definitions for stress, deformation, and strain:

where the Modulus of Elasticity (Young’s Modulus) is equal to the normal stress divided by the longitudinal strain.  Further, in the Elastic Region of the stress-strain curve, a material will return to its original shape while in the Plastic Region permanent deformation is induced.  The material finally ruptures and breaks.

Before Class: Purchase enough Twizzlers so that each student and the instructor will have two.  It also helps to open the package before hand to speed up the process.

In Class: During the lesson, the stress-strain curve is drawn and the various regions on the curve are identified (Elastic, Yielding, Inelastic/Plastic, and Fracture) (figure below). Then bring out the Twizzlers to allow the students to make real-world observations about these various material behaviors. 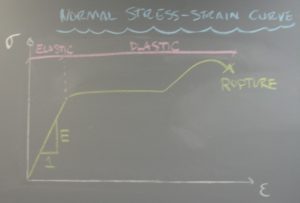 Each student will have one Twizzler as a control and the other will be used for the experiment.  First, have the students pull on the experimental Twizzler with a small amount of force and notice how it will go back to its original length as compared to the control Twizzler (the Elastic Region).  Next, have the students pull on the Twizzler more, just enough to induce permanent deformation so that it remains longer than the reference Twizzler, but not enough to break it (figure below, top). Plastic behavior!  Finally, have them pull on the Twizzler with enough force to cause it to rupture (figure below, bottom)!

After using the Twizzlers for the demo, destroy the evidence by eating the training aids!