This is a simple demonstration of the mechanical advantage associated with pulleys and a solution method for pulley problems.  By building a pulley system in the classroom, students can gain a physical appreciation for the problem at hand.  This demonstration should take 15-20 minutes.

This training aid demonstrates mechanical advantage obtained through pulleys and the fact that the tension throughout a continuous cable in a pulley system is constant. 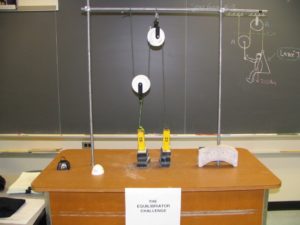 Before Class: Set up the pulley system as shown in the photo, with one pulley hung from overhead and the other “free” hanging in the system.  Make sure the two weights are very similar, though they do not need to be exactly the same.  Support both weights or you’ll give away the conclusion.

In Class: Class starts with the “Equilibriator Challenge.”  Have the students observe the system of pulleys and vote on which 2 lb weight will plummet to the desk when the erasers are removed.  After some buildup, the erasers are quickly swept from under the pulley system and the weight on the right plummets. 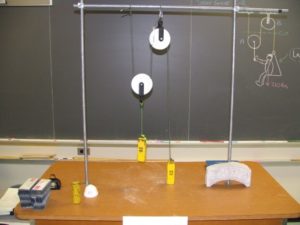 We then develop how we could analyze such a system by investigating the problem of Lazy John, who wants to raise himself to inspect the roof (concerned with student safety) but doesn’t have the strength to pull himself up without assistance.  The students must compute how hard John has to pull to begin to raise himself using the pulley system.  After solving the problem using appropriate diagrams (shown in the photos of blackboard solutions), students realize that the ratio between the forces to obtain equilibrium is 2-1.  We then return to the physical model and validate that 4 lbs on the left and 2 lbs on the right remain static and are thus at equilibrium.

As students enter class, a clip from Monty Python’s Holy Grail offers a great intro – the scene where it is proved that a certain woman is a witch because, using an equilibrium device, it is found that she weighs the same as a duck.  This lesson is also one in which we begin discussing cable structures subjected to concentrated loads.  Hence, we also utilize a pulley to balance one end of a cable system suspended across the classroom.  By adding or removing weight from the counterweight, we cause the entire cable system to change shape to achieve a new state of equilibrium.  A cable with three point loads is pictured first, and the counterweight is pictured second.  The other end (without the counterweight) is just tied off to the ceiling. 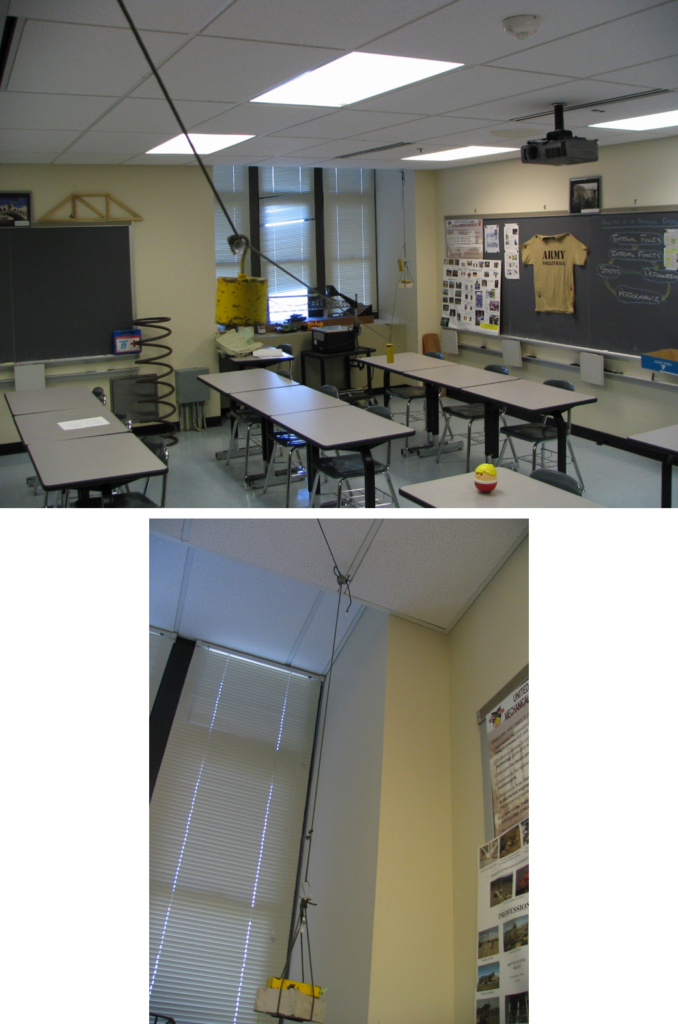