Use this daunting looking model to set the stage for a lesson on 3-D equilibrium and eventually persuade your students that it’s easier than it looks!  This demonstration should take 20 minutes.

In order to keep all of these equations and forces organized, it becomes important to begin to describe forces and moments with Cartesian vectors and to use matrix algebra to solve the systems of equations that result from application of the principle of equilibrium.  For Example, the Moment and Force Reactions at a fixed support might be described as:

Some supports will not hinder translation in or rotation about one or more axis.  In this case, the value for the magnitude given by A-F above will be zero.  In order to describe a force as a vector given the force’s magnitude and line of action, one must first determine the unit vector of the force, then multiply it by the force’s magnitude.  For example, the Unit vector describing a force with a line of action from point A to point B is found by dividing the position vector from A to B by the magnitude of that vector.

The final key element to determining equilibrium in 3D is to determine the Moment vector that is caused by any force vector acting at a distance from a point.  In order to determine this, the cross product is used between the position vector from the point in question to any point along the force’s line of action and the Force vector.  Using our previous example, the Moment caused by our Force AB about point 0 would be given by the cross product of a position vector from point 0 to any point along the force’s line of action (in this case we chose point A) and the Force vector AB.

Armed with these basics, 3D equilibrium problems can be easily solved. 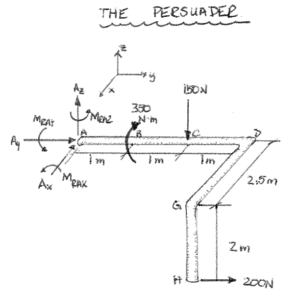 At the beginning of class, point out the persuader and really build it up as a very difficult problem to solve, but that by the end of class it will be one that they can solve with ease.  Begin by defining a Cartesian vector in 3 dimensions and what it means.  Then, discuss support conditions in 3 dimensions and what vector support reactions would result from a fixed, hinge, cable, and other types of supports.  Next, review how to describe a force with a certain line of action and magnitude by a Cartesian vector.  First, determine the position vector for the line of action, then calculate the unit vector by dividing the position vector by its’ magnitude.  Finally, multiply the magnitude of the force by the unit vector to get the Cartesian force vector.  The final step prior to being able to solve “the Persuader” is to review the procedure for calculating the moment of a force about a point in 3D space by using the cross product.

Translate the Persuader into a free body diagram on the board by isolating the body and replacing the support with the respective reactions that would occur.  The free body diagram should look like Fig. 2 shown above when completed.

Once that is complete, the process of writing all of the force vectors and position vectors, then applying the equations of equilibrium is really quite painless.  Show the students how to organize their equations into a table or a matrix in order to keep all of the unknowns straight in the equations.