This is a demonstration of the relationship between density and buoyancy.  It reinforces the concept that fluids that are less dense have a higher buoyancy.  In the case of the lava lamp, this causes the “lava” to rise vertically as heating causes its density to change.    This demonstration should take 3-5 minutes.

Archimedes Principle states that the buoyant force acting upward on a body is equal to the weight of the fluid displaced by the floating body.

In this demonstration, a lava lamp demonstrates the buoyant force acting on a mass of translucent wax.  The wax is initially on the bottom of the lamp where the light bulb at the bottom heats it.  As the mass of wax heats, its density decreases and its volume increases.  Archimedes principle states that as the volume of molten wax increases, the buoyant force acting upon it also increases.  At some critical temperature and volume, the density of the wax is less than the density of the surrounding fluid, and the mass of wax rises.  Once at the top of the glass, the wax cools slightly, and its volume decreases as its density increases.  The wax mass then descends to the bottom of the lamp where the cycle repeats. 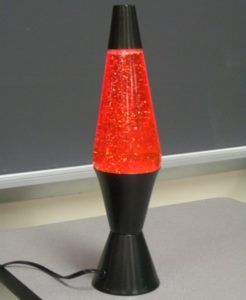 Before Class: Plug in the lava lamp at least 45 minutes prior to class.

Observations:  Students should be able to see the effect of varying density and volume upon the buoyant force.

Additional Application: For a tangential discussion, note that lava lamp have been used to initialize to create random numbers due to the chaotic nature of convective heating.